For this final art post of Orctober, I bring to you, according to the artist, Kim Sokol, the fanciest orc. Why this one? It’s an orc in a flower crown. Orcs can be soft and flowery too, my dudes. This piece has been in my favorites for a long time now and I hope you enjoy it as much as I do.

I found this next piece on r/DnD and was struck immediately. Great style, rad character concept, and one talented artist in Killarney Shields. Have a look at her work, and then maybe follow her for more! 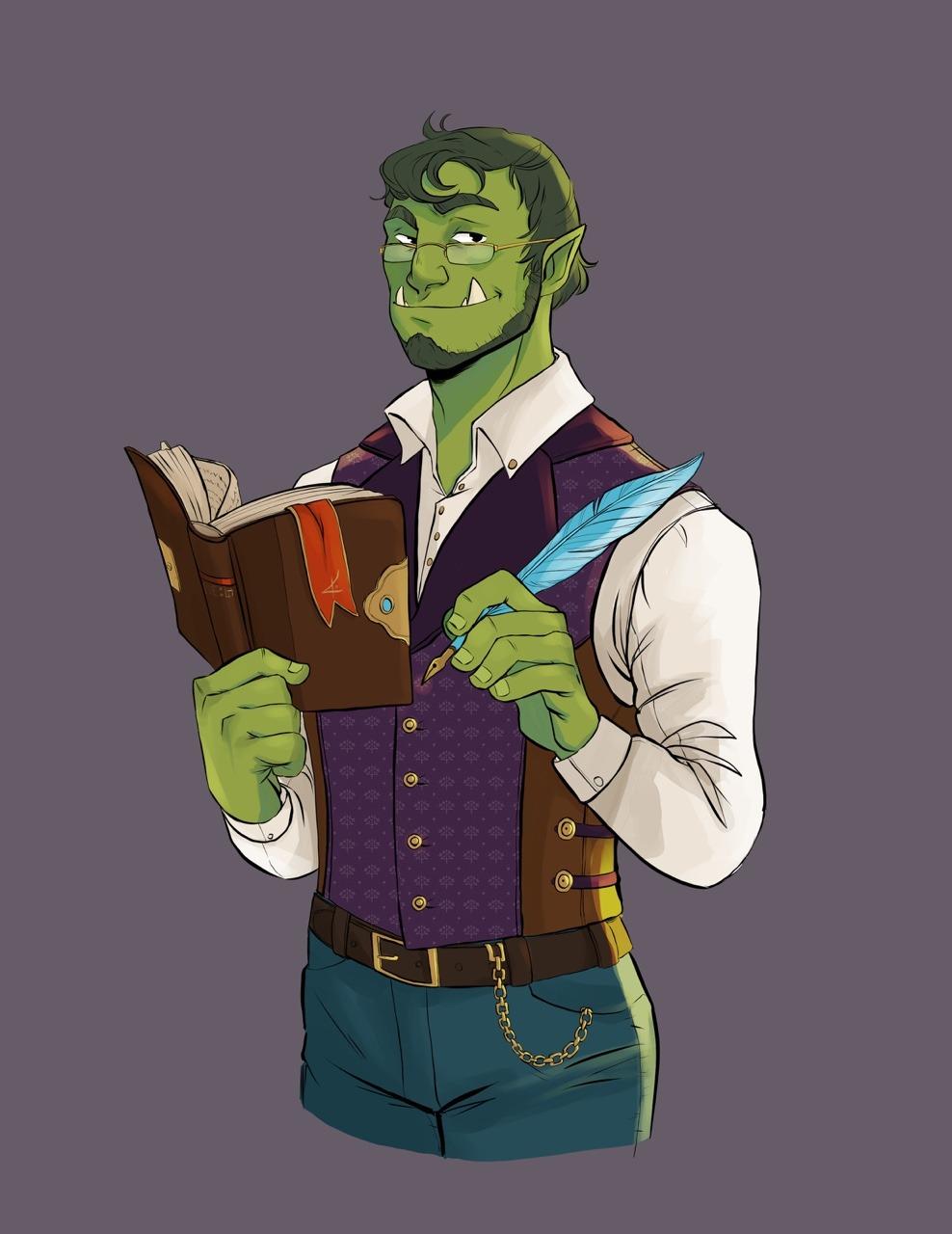 Took some time out of doing commissions to draw my own Dungeons and Dragons character :0 for an upcoming campaign my friend has invited me to.

This is Cromwell; a half-orc who is very much a ‘dad’ figure for the group. He uses his magic to protect rather then harm. He left his college of magical studies in order to explore the world for his own, wanting to see new places and experience new things; things that he’s only ever read in books before.

Cromwell tends to let his compulsion obsessions get in the way of the mission, spending far to much time trying to fix broken statues and cleaning up dungeons before actually getting to exploring.

He’s a big fan of elven fashions but normally has to spend a pretty penny for them to even custom make them for his size. He gets quite upset if his clothes get torn during missions and will often pull put a needle and thread and get to work on the tear before doing anything else.

My commissions are currently closed but you can check out more of my DnD related work at:

For today’s art post, I wanted to highlight a series of drawings a user on tumblr did a few years back that illustrates orc women in a variety of different jobs. Emilee Denich, aka ghostgreen on tumblr, posted the set in November of 2015, simply saying, “today after work i amused myself by drawing some orc ladies (◕‿◕✿).” And the set was a treat. She did two sets, which you can see for yourself in full here and here, and I’ll be sharing a couple of my favorite ladies below. Maybe drop Emilee a line and tell her how much you like her orc ladies! 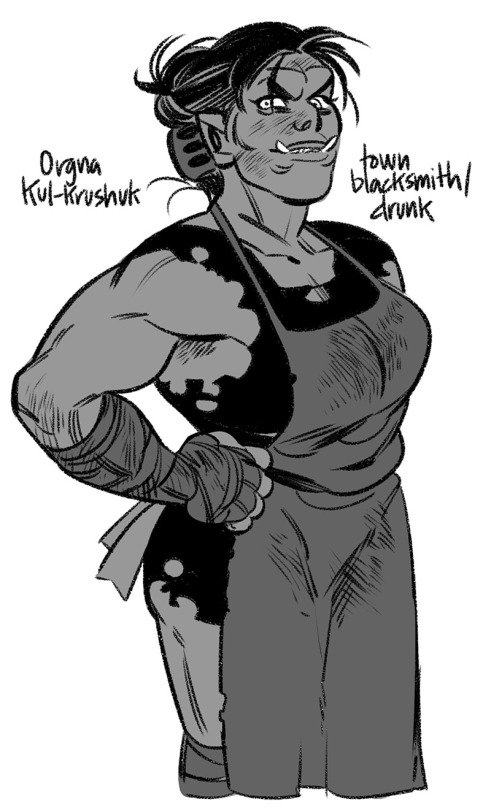 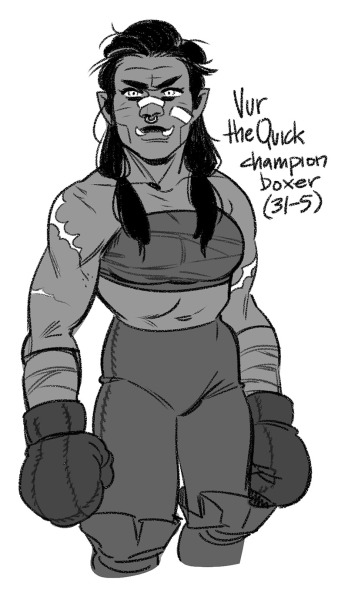 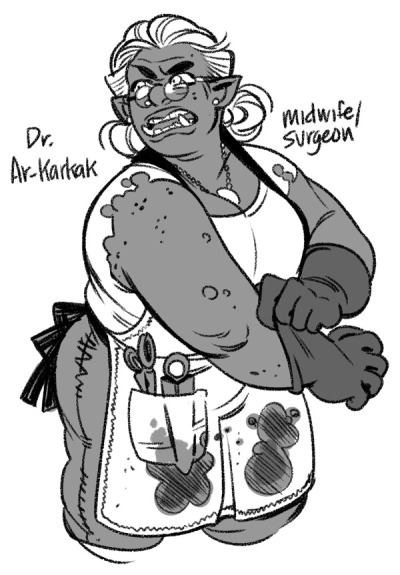 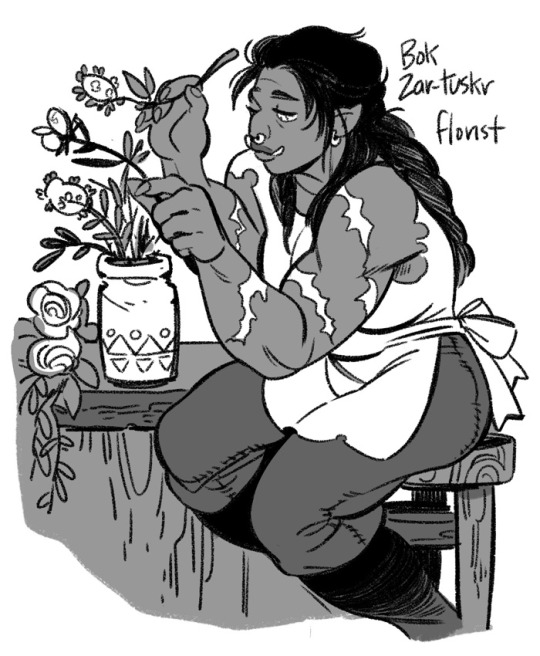 The Thinking Orc by Turner Mohan

Do orcs ponder their lot in life? what do they think about when they’re not fighting each other or the free people? It’s a question Tolkien left largely unanswered in his books, and the role of the orcs as the all purpose “others” who are patently evil and may therefore be slaughtered indiscriminately by our tall, grim, piercing-eyed heroes is about the only thing in Tolkien’s vast legendarium that leaves me with some reservations. I always wanted to know more about the orcs (beyond their perpetual role as cannon fodder for various dark lords) Cirith Ungol and the uruk hai were two of my favorite chapters in LOTR because at least we get some glimpses of orcish society (same reason I always liked the goblin town part of the hobbit).

I imagined for this piece a scene of an orcish chieftain like Azog or the Great Goblin, now a few years past his prime, living in some conquered city built centuries earlier by more advanced people (like Tol Sirion, Minas Ithil, or Moria) laying aside his weapons and pouring curiously over old tomes deep in an abandoned study. Maybe he cant even read, just pondering the very act of writing itself.

I really like this piece. It’s been in my favorites on Deviantart for years at this point, the piece itself having been published in 2013. The artist’s comments make for an interesting bit of thought. Conceptually, an orc doing something besides being a ravaging dickhead obviously speaks to me. Hopefully you enjoy it as much as I do.

Grimluk, Demon Hunter
Vol 4, By Demons Be Driven - Out Now

Tweeting into the Void